Just to the northwest of Adams Mill on Wildcat Creek is an historic covered bridge. The Adams Mill Covered Bridge was built in 1872 by the Wheelock Bridge Company of Fort Wayne, Indiana.

When the covered bridge law was passed by the Indiana Legislature about 1845, the Carroll County Commissioners received many petitions for these bridges, especially along the “raging Wild Cat.” By 1870 the Commissioners’ records show that numerous petitions had been filed. The first iron bridge over the Wabash River was just being built, but across smaller streams the clamor was still for covered bridges.

Because these bridges were constructed with timber, they were covered to protect them from the elements. An added advantage was that nervous animals could more easily focus on the far bank when they didn’t see the water below. Bridges were often the largest covered area in a community and were sometimes used for church meetings, weddings, and political rallies. Bridges were wide enough to accommodate passage of a load of hay.

In 1870 Richard Loman, an influential resident of the community near Adams Mill, and others filed a petition asking for a covered bridge “over Wild Cat at Adams Mill.” The petition was granted by the County Commissioners (Warren Adams—son of John Adams, David Carson, and Mahlon Kerlin were Commissioners) and the contract let the following year. In 1872 the bridge was built by Wheelock’s assignee, R.W. Smith and Co. They built this and a similar bridge at New Lancaster for a total of $12,237. (The Lancaster Bridge near Owasco still spans the Wildcat and was recently restored.) 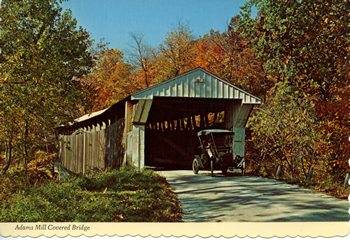 Specifications called for the bridge to be of the Howe Truss type, with abutments and piers of Wheelock’s improved patented iron. The patented Howe Truss design substituted iron rods for wooden posts as tension members and thus eliminated one heavy timber per truss and provided a means of easy adjustment by having screw ends with washers and nuts. The rods could be easily shipped and the truss timbers prefabricated, making possible quick assembly.

The floor was to be laid diagonally, two inches thick – joists 20 inches apart – sides of good dressed stock to be battened with three inch bats, molded. The top was to be covered with 18-inch shingles. The bridge was about 144 feet long and 16 feet wide. The sides were to be cased and painted white as were the ends. Many years later, around 1900, the full-length wooden Burr arches were added so that the bridge could bear greater weight.

The bridge served the area very well for many decades, but by 1957 it was deteriorating to the point that the Questers Club (a Carroll County club oriented toward history) began trying to raise money to preserve the bridge. They had local artists paint pictures which were put on cards which were then sold. They even planned a 14-acre park near the bridge. Over a thousand petitioners convinced the Commissioners not to replace the bridge, as it continued to deteriorate.

The bridge was closed to vehicular traffic in 1974—102 years after its opening—because of its dangerous condition, and in 1978 vandals tore off large sections of the walls and dropped them into the Creek. Fires were set, and graffiti covered what was left. Through some miracle, the skeleton of the bridge held itself in place.

In 1992 Friends of Adams Mill Valley, Inc. was formed to promote interest and awareness of the area, and to attempt to raise money to restore the bridge. At the same time, they successfully applied through the County to the Indiana Department of Transportation (INDOT) for a Transportation Enhancement (TE) Grant of $291,000. Through numerous events, sales, and promotions, by 1999, the group had raised over $85,000 which was transferred to the County to provide the 20 percent match to the grant. 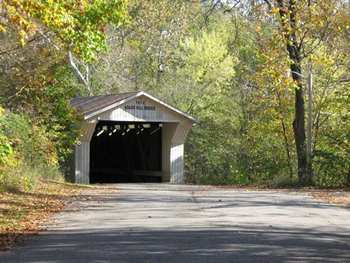 In the mid-1990s, the bridge was also closed to foot and bicycle traffic due to cracks in the load-bearing timbers, but dedicated volunteers continued working toward the goal. In January 1996, the Adams Mill Covered Bridge was listed on the National Register of Historic Places, also through the efforts of the Friends.

In 1999 the Kaser-Spraker Construction Company of South Bend, Indiana, began the complete restoration of the bridge, and on October 9, 1999, 250 people gathered at the bridge to hold a parade and celebration for its re-opening. Window openings had been added to the original design so that visitors can view the Wildcat Creek from the bridge. The beautifully restored bridge supported a three ton weight limit. The final project cost was $686,000.

The bridge is on a county road and falls under the maintenance of the County Highway Department which contracted with a company to do some repairs and re-paint the bridge in 2010, thus keeping it in fine condition.

A new, short video shows the interior structure of the bridge as well as the bridge's setting.

Adams Mill is now closed for the season.  The grounds are always open during daylight hours.

Contact:
This email address is being protected from spambots. You need JavaScript enabled to view it.